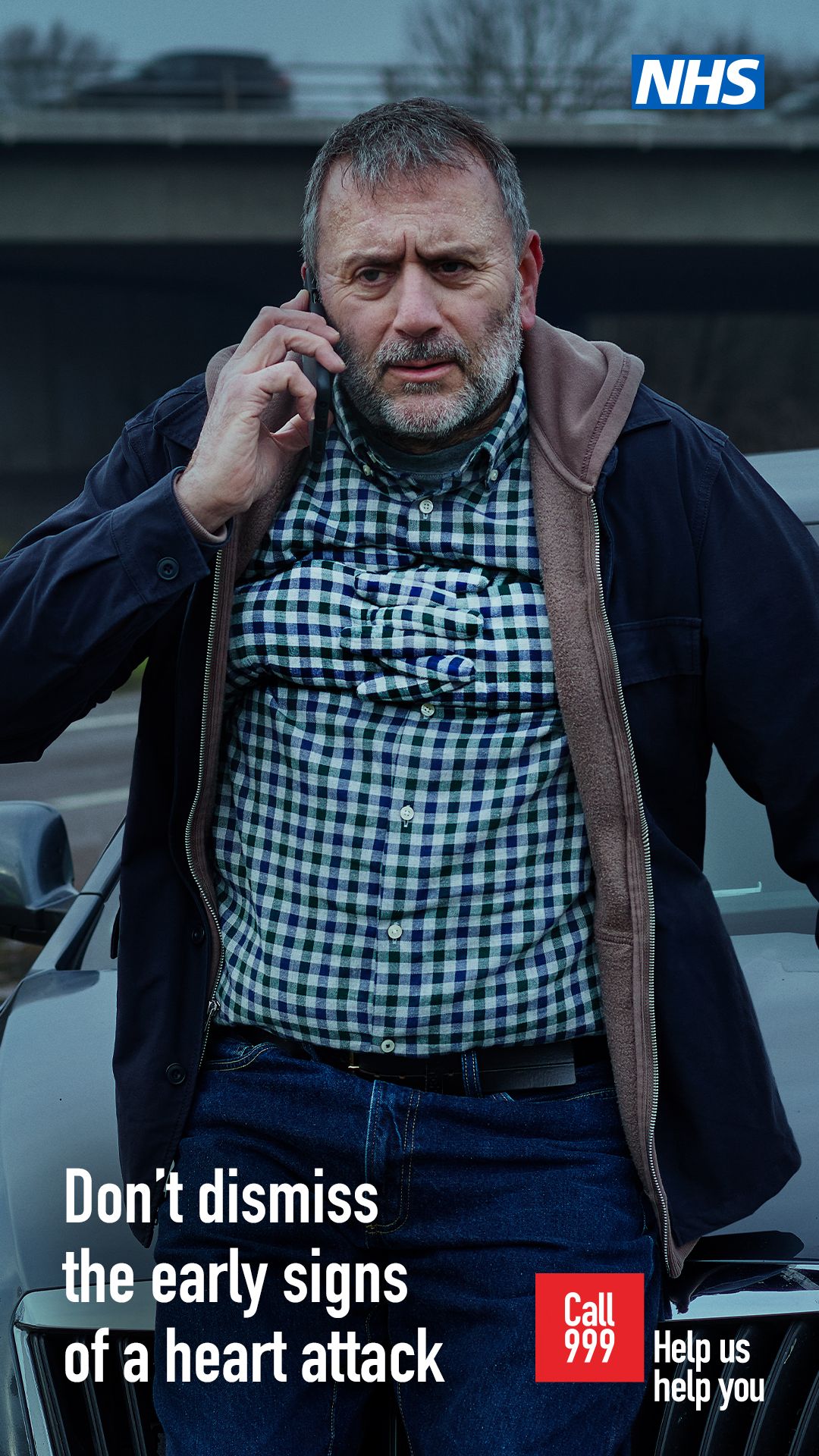 This February, NHS England and NHS Improvement is raising awareness of heart attack symptoms as part of the latest ‘Help Us Help You’ campaign.

The NHS in the North West today joins with the health service across the country to launch a new lifesaving campaign to encourage people to dial 999 when they are having early signs of a heart attack.

Backed by celebrities including One Foot in the Grave actor Richard Wilson and Sky Sports presenter ‘Tubes’ - the campaign will tackle a number of common heart attack myths, after research identified that 70% of people in the North West thought a heart attack was the same as a cardiac arrest.

The new polling also showed that fewer than half of people in the North West (43%) said they would dial 999 if they or a loved one experienced lesser known symptoms of heart attacks.

The campaign, which will run from 14 February to 31 March 2022, is the first of the NHS ‘Help Us Help You’ campaigns specific to heart attacks.

Speaking of the launch, the region’s top doctor said thousands of deaths could be prevented with earlier treatment if people recognise these vital signs.

NHS North West medical director, Dr David Levy, said: “It is tragic that one in four deaths in England are caused by cardiovascular disease.

“This is the single biggest area where we can save lives in the next ten years and this new campaign is a vital step forward on that lifesaving mission.

“We need to help educate the public to recognise the symptoms of a heart attack so they are ready to help themselves, their loved ones, and indeed anyone around them experiencing a heart attack and know crucially when to seek early medical help.

“Some symptoms are not well known and many are easy to pass off as unimportant because they don’t seem as severe, but it is never too early to dial 999 in this circumstance – and the faster you act, the better the chance of a full recovery.”

New NHS research also shows that whilst 68% of those surveyed in the North West understood that pain in the chest is a symptom of a heart attack, just 48% knew sweating was a symptom and only 29% understood feeling weak, lightheaded (30%) or a feeling of general unease (32%) were also symptoms.

Richard Wilson, actor and director, said: “I’ve battled with my heart health for a while, and since experiencing a heart attack I've really opened my eyes to the impact it’s had on my life.

“I got more tired, I’m able to walk around less and my memory has suffered as well. The scariest part is that at the time I did not know enough about heart attacks or heart health.

“I'd advise everyone, especially those aged 50+ to look up the symptoms of a heart attack and if you suspect you have any of these to call 999 immediately.”

Peter Dale (Tubes), presenter on Sky Sports’ Soccer AM who experienced a heart attack at 36, explains how his symptoms didn’t seem serious to him at first:

“I had no idea that I was experiencing symptoms of a heart attack at the time. On the morning of the attack, I went home after playing football thinking I had indigestion – I just didn’t feel quite right and both of my arms started to feel numb.

“I managed to text my mum who called an ambulance and only when the paramedics arrived did I realise this was a heart attack.

“People need to be aware of the symptoms – it’s not a case of clutching your chest and falling to the ground – early signs aren’t always severe but if you experience any symptoms, call 999. Acting quickly saved my life.”

The new NHS campaign will also highlight to the public the difference between a heart attack and cardiac arrest.

A heart attack occurs when the supply of blood to the heart becomes blocked, which can starve it of oxygen potentially causing serious muscle damage. Whilst the early signs of a heart attack can vary, the most common include squeezing across the chest, sweating and a sense that something just isn’t right. The person will be conscious and breathing.

A cardiac arrest is different - it usually occurs suddenly and without warning with the person quickly losing consciousness. Their heart stops, they will have no pulse and sadly people experiencing a cardiac arrest will usually die within minutes if they do not receive treatment. A heart attack can lead to a cardiac arrest.

John Price, 73, an avid motorcyclist from Banks in Lancashire, who underwent a triple heart bypass at Liverpool Heart and Chest Hospital at age 70, said: “My wife and I were on holiday at the time. We’d gone walking and were walking up quite a steep slope and I got this pain in my throat. It was only there for a couple of minutes and when I stopped walking it subsided quite quickly.

“A few weeks later I went to see my doctor to ask about it. I just thought it was acid, but she wasn’t happy and she was obviously on the ball because she sent me straight to a rapid chest pain clinic. The questionnaire they made me fill in while I was there asked me about all these symptoms, but I’d never had any chest pain, all I had ever had was this pain in my throat and some stomach discomfort.

“Anyway, they found a blockage and told me I needed to have a triple heart bypass and if I didn’t have the operation within the next 12 months I would have a massive heart attack.

“Honestly, they were amazing, nothing was too much trouble, and I can’t thank them enough for the care I received. I've been a motorcyclist since the age of 16 and I'm still riding my Harley Davidson aged 73 thanks to them.”

Elliot Cosgrove, 60, a dedicated  hiker from Burscough in Lancashire, who had a heart attack while getting checked out at Southport Hospital at age 54, said: “I experience what I would call indigestion. I’m at that age where I only have to look at a pie or a pasty and I get heartburn, so I didn’t pay a lot of attention.

“In the end, my wife badgered me, so I went in to Southport A&E where they monitored me for a few hours and I actually ended up having a heart attack in the hospital. I remember they were coming in to give me a chest x-ray and I said ‘oh, I don’t feel very well’, and that was it!”

“They were so great, I had the procedure done on a Friday and I was out walking the dog on Saturday afternoon. I am just so indebted to them, when you think what the outcome could have been.

“I would just say to anyone who is experiencing any symptoms at all not to ignore it, just get straight onto 999. Don’t hesitate.”

“Sudden pain, tightness and pressure on the chest can all be signs that someone is having a heart attack, with other symptoms including shortness of breath and pain travelling from the chest to the arms, jaw, neck, back, or stomach.

“For anyone who experiences symptoms such as this, it’s really important to call 999 and seek urgent medical attention - the NHS is here to help.”

Dr Charmaine Griffiths, chief executive of the British Heart Foundation, said: “Every minute counts when you’re having a heart attack – it’s a medical emergency, and immediate treatment could be the difference between life and death.

“It can be easy to dismiss early symptoms of a suspected heart attack, but don’t think twice about dialling 999. The NHS and our emergency services are there for everyone, and one quick call could save your life.”