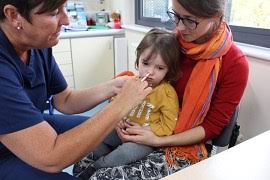 Wiht two thirds of toddlers still not vaccinated against the flu, the NHS in St Helens is urging parents of toddlers to get the nasal spray vaccine at their local GP surgery.

The proportion of people falling ill with flu across the country continues to rise as new figures from Public Health England show more than two-thirds of toddlers have not had their flu vaccine.

New data shows there were eight deaths in intensive care units in the week to December 8 when flu was a factor - the highest number this season and taking the total death toll for the UK to 15 over a nine-week period.

Children aged two and three are eligible for the nasal spray flu vaccine via their GP surgery but latest figures show that only 28.9% of two-year-olds have had the vaccine, while the figure is at 28.1% for three-year-olds.

The proportion of people seeing their GP because of flu has also risen, with the highest rates seen in children aged one to 14.

Calls to NHS 111 regarding cold and flu also continue to increase and stand at ‘medium intensity levels’, with ‘highest activity noted in the five to 14 years age group and in the north of England’.

Sue Forster, Director of Public Health in St Helens, said: "Flu season has now started and so it's really important that people get their flu vaccine as soon as possible to ensure they are protected against this potentially very serious illness.  This is especially important for small children who are particularly susceptible to the flu and are ‘super spreaders’.  We’ve had outbreaks of flu in schools and nurseries where children are in close contact with each other meaning the virus can be easily spread.

“Our GP practices in St Helens have stocks of the nasal spray vaccine which is for 2-3 year olds and I’d urge anyone who has not yet had their children vaccinated against the flu to do so before Christmas to guard against becoming ill over the festive period.  All the evidence suggests the vaccine is a good match for the main strain of flu that is circulating and we are continuing with our programme of vaccinating primary school age children after delays from the manufacturer.

“Also those under 65 with a serious long term health condition are eligible for a free flu jab from their GP or pharmacist should also make sure they get themselves vaccinated as catching the flu can cause potentially serious complications such as bronchitis and pneumonia.”

Local parent, Debbie Rigby, from Eccleston has ensured daughter Isla, age two, has had her flu jab at her GP practice:

“I was conscious that flu seems to be on the rise this year and that’s why I thought it was important to take Isla to my GP practice and get her vaccinated.  The nasal spray vaccination is really quick and easy and will ensure that we can spend Christmas without the worry of her catching the flu at nursery.”